I got to work yesterday morning to find a loving note from my buddy Claire saying simply “sorry I broke your glasses.” I was touched. Especially when I had a very sincere conversation with her later that day in which she tenderly told me that her dad made her do it. But deep down, I know she didn’t really mean it. And so I was out at lunch with the kiddies again and Mikala called me over to witness their little sorority meeting. They were going through the rules of their sorority. “Rule number one – we don’t talk to Dustin. Rule number two – we REALLY don’t talk to Dustin. Rule number three – we REALLY REALLY don’t talk to Dustin. Rule number four…” By the seventh rule, I started to get the pattern. I decided standing there getting ridiculed by 10-year old girls wasn’t the best use of my time. And so I started playing with the boys. Their games were very straight forward. They were grabbing me by the feet and trying to make me drag them across the yard. I finally broke myself loose and inevitably it turned into a spirited game of Get Mr. Dustin. This is a game where I run away from the kids and they chase after me. I generally always lose this game one way or another. I can play Dante Hall in the yard and fend them off for a decent amount of time, but all it takes in one kid to catch up to me and weaken my defenses, and then the game changes from Get Mr. Dustin to A Young Adult’s Fight For His Life. This game comes with a warning that Mr. Dustin is not responsible for anyone injured as a result of me falling on them because of the hundreds of pounds of kids anchoring my balancing mechanisms and the other hundreds of pounds of them pushing my torso in different directions. Unfortunately, that warning encompasses myself also.

I have a friend named Erick who I don’t hear from very often, but when I do, he makes his presence known. He decided to chime in with his analogy amongst all of my recent attempts.

“Being single is like Texas Hold ‘Em. If you play like an idiot, you can confuse people into submission. Or lose all of your money. Or your pants.”

If you think you can do better, chime on in.

Running into the sun but I’m running behind,

Posted by Dustin Fisher at 4:02 PM 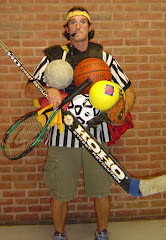